Why was there a WWI?

Why was there a WWI? Pt 5 Assassination

The best book on this aspect is that by Tim Butcher, which was mentioned at the start of this article. In essence, the key falsehood was that it was a plot by the Serbian government. In fact, the assassin, Gavrilo Princip, was a Bosnian Serb who collaborated with others including Bosnian Croats and Bosnian Muslims to effect the assassination. They were trained and supported by the Black Hand, a group of extreme Serbian nationalists (whose leaders were subsequently executed by the Serbian government in 1917, for treason). The Black Hand had organised guerrillas in Macedonia, and so had weapons.

The context is that Franz Ferdinand was in Sarajevo for military exercises in his role as inspector general of the army. His wife Sophie was there with him, as it was out of Vienna and they were away from the stultifying protocol of the royal court. They visited the local market in Sarajevo on 26th June to buy some presents for their children. The 28th June was the official visit to Sarajevo.

Gavrilo Princip was a Bosnian citizen and an ethnic Serb. His legacy in Bosnia today is rather clouded by the Yugoslav wars of the 1990s, and the siege of Sarajevo by Bosnian Serb militias. He was not a member of any secret society.

The “Black Hand” were at odds with Serbian government. Dragutin Dimitrijevic (“Apis”) was the Black Hand leader and a colonel in the Serbian Army. He had also personally participated in the murder of the Serbian king and queen in 1903.

Austria relied on German intelligence in Serbia but the German information came from Apis, the leader of the Black Hand. Oddly enough, he never mentioned the Black Hand to Germany. So, Austria did not know of the Black Hand? That seems difficult to comprehend but may in fact have been the case.

Princip had been turned down for military service with Serbia in 1912 by Major Tankovic, who was also involved with the Black Hand. Now Tankovic gave Princip guns and bombs as Tankovic wanted to stir up trouble in Bosnia, and did not consult anyone else. The Serbian government heard of the plot, possibly from Tankovic, and pressed Apis to stop it. The Serbian government told the Austrian minister for Bosnia that there was a risk to the Archduke but he did not pass on the warning!

Princip was told by Apis to abandon the attempt, but Princip ignored Apis.

Security was in the hands of the Austrian army. There were 150 troops in Sarajevo but there were a further 20,000 on manoeuvres within 20kms of Sarajevo. So, the security detachment could easily have been strengthened at short notice, but was not.

There were six conspirators in Sarajevo on the fateful day, of whom one managed to throw a bomb at the motorcade. The rest failed to do anything. The bomb fell off the Archduke’s car and injured some people in the following car. The motorcade carried on to the town hall.

After some time, Franz Ferdinand wanted to visit the wounded. So, the route to be taken in the afternoon was thus altered but the drivers were not told!  Consequently, Franz Ferdinand’s car turned off the quay to the old town. The driver was told to reverse back and continue down the quay. (The car does have a reverse gear – it is in the army museum in Vienna).

Princip was tried and jailed. He could not be executed as he was under the legal age for capital punishment, unlike some of his colleagues. He died in jail in 1918.

Apis and associates were framed by Serbian Prime Minister Pasic in 1917 and were shot for treason.

(Right - The Graf & Stift car in the Vienna army museum) 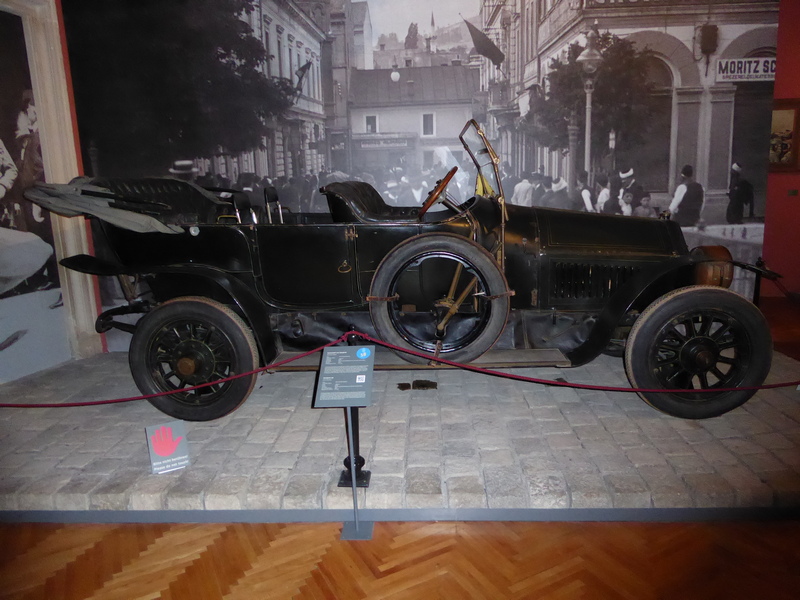 27. The reaction to the assassination

There was little public reaction in Vienna, mainly because he was an unknown. He did not live there, he lived 60kms away in Pressburg. British historians often misinterpret the lack of public reaction as Franz Ferdinand being unpopular. This is not true. The Viennese public did not know who he was.

A quote from a British diplomat who was in Vienna for the funeral said that “they buried him like a dog”. No foreign dignitaries were invited to the funeral. The lying in state was a mere four hours. No honour guard had been organised. When his friends in the army found out, they quickly organised a cavalry escort from the troops garrisoned in Vienna.

He and Sophie were not buried in Vienna but at Schloss Artstetten, an hour’s train journey from Vienna. He had bought this modest country house to be the dower house for Sophie after he died, so that when she passed away they could be buried together. He suspected, rightly, that after he died the powers that be would not let Sophie be buried with him. So, today they do rest side by side, in a crypt under the chapel at Schloss Artstettin, with their two sons.

His nephew Karl became the new heir and succeeded to the throne in 1916. He was the last emperor (Kaiser) of Austro-Hungary.

Austro-Hungary had no solution to Serbia, which was a major part of the “South Slav” problem, in other words nations which needed some form of autonomy to quell nationalist sentiment. It was recognised that it was pointless to annex Serbia. The Austrian regime believed that humiliating them and reasserting Austrian “superiority” was the only feasible solution.

Conrad von Hoetzendorf, head of the Austro-Hungarian army, said that Austria would have to mobilise fully to release forces to punish Serbia, and a that a partial mobilisation was not possible.

The next section is here