In this edition, we have the second part of an article from Keith on his summer meanderings, an article on a WWI Canadian “First Nation” nurse, and an endnote for steam railway enthusiasts.

Charlotte Edith Anderson Monture was born on the Six Nations reserve near Brantford, Ontario on 10th April, 1890. (The Mohawk are one of the “Six Nations” that make up the Iroquois, hence the name of the reserve and Edith was Mohawk.) She was the youngest of eight children. She attended school on the reserve and went on to Brantford Collegiate Institute where she achieved her high-school diploma at a time when this was rare for any Canadian woman, indigenous or otherwise.

In her early 20s, she decided to train for nursing. As most Canadian schools of nursing excluded “indigenous” women (today referred to in Canada as First Nation), she tried in the USA and was accepted by the New Rochelle Nursing School in New York. In 1914, she qualified first in her class. She worked as a nurse at a private school in New York until the USA entered the war in 1917. Aged 27, she volunteered for the United States Army Nurse Corps, one of 14 Canadian nurses in the Corps, several of whom were also First Nation.

Before leaving to serve overseas, she visited her family and was given ceremonial Mohawk burial clothing in case she should die in the war. Many of her community had already been lost in the Canadian forces. The Brantford Six Nations reserve was one of the highest sources of First Nation enlistment.

For more than a year, she worked in France, mainly at Base Hospital 23 in Vittel, in eastern France. At the age of 93, Edith was interviewed by her local newspaper and recalled “We would walk right over where there had been fighting. It was an awful sight; buildings in rubble, trees burnt, spent shells all over the place, whole towns blown up.”

After the war, Edith returned to the Six Nations reserve and married Claybran Monture. They had five children, one of whom died in infancy. She worked on a casual basis as a nurse and midwife at a hospital on the reserve and advocated for better health care for the First Nation population. In 1939, she was elected honorary president of the Ohsweken Red Cross. She died in 1996, shortly before her 106th birthday.

Group Captain Lionel Wilmot Brabazon Rees was born on the 31st July 1884 at 5 Castle St, Caenarfron. His parents were Charles Herbert Rees and Leonara Rees. He was educated at Eastborne College, then at the Royal Military Academy at Woolwich. He was commissioned on the 23rd December 1903 into the Royal Garrison Artillery.

He was awarded his Military Cross in 1915. His citation reads:-

“For conspicuous gallantry and skill on several occasions notably the following:-

On 21st September 1915, when flying a machine with one machine gun, accompanied by Flight-Sergeant Hargreaves he sighted a large German biplane with two machine guns 2,000 feet below him. He spiralled down and dived at the enemy, who, having a faster machine, manoeuvred to get him broadside on and then opened heavy fire. Despite this Captain Rees pressed his attack and apparently succeeded in hitting the enemy's engine, for the machine made a quick turn, glided some distance and finally fell just inside the German lines near Herbecourt.”

“On 28th July 1915, he attacked and drove down a hostile monoplane, despite the main spar of his machine having been shot through and the rear spar shattered. On the 31st August 1915, accompanied by Flight-Sergeant Hargreaves, he fought a German machine more powerful than his own for three-quarters of an hour, then returned for more ammunition and went out to attack again, finally bringing the enemy's machine down apparently wrecked.”

His Victoria Cross was awarded for action on the 1st July 1916. His citation reads:-

“For conspicuous gallantry and devotion to duty.

Whilst on flying duties, Major Rees sighted what he thought to be a bombing party of our own machines returning home. He went up to escort them, but on getting nearer discovered they were a party of enemy machines, about ten in all.

Major Rees was immediately attacked by one of the machines, and after a short encounter it disappeared behind the enemy's lines, damaged.

Five others then attacked him at long range, but these he dispersed on coming to close quarters, after seriously damaging two of the machines. Seeing two others going westwards, he give chase to them, but on coming nearer he was wounded in the thigh, causing him to lose temporary control of his machine. He soon righted it, firing at close-contact range of only a few yards, until all his ammunition was used up. He then returned home, landing his machine safely in our lines.”

In November 1918, he was awarded the Air Force Cross in recognition of valuable flying service.

In 1919, he was awarded the Order of the British Empire.

On the 1st August 1919, he resigned his commission with the Royal Garrison Artillery and took a permanent commission in the newly formed Royal Air Force.

From June 1920 until May 1926, he was in command of training at RAF Cranwell. He was promoted to Group Captain. In May 1926, he was posted to RAF Amman and given command of Transjordan and Palestine. It was during this time that he became interested in archaeology. He took some of the first aerial archaeological photographs. He retired from the RAF in 1931.

He returned to Wales and in 1933 sailed single-handedly across the Atlantic to the Bahamas.

During World War Two, he returned to the UK and served in the RAF in Africa.

In 1947 he went back to the Bahamas. He was 62 years old. He married a young local woman with whom he had three children. He died in on the 28th September 1955 and is buried at Nassau War Cemetery.

While I was staying on Anglesey, I took the opportunity to visit the memorial at Holyhead Breakwater Country Park. The memorial is to the ten man crew killed when their B24-J Liberator of the 36th Bomber Squadron of the US 8th Air-force crashed on the 22nd December 1944 at North Stack. The name of the aeroplane was “Jigs-Up”.

Also on the water front overlooking the harbour at Holyhead, is a Memorial to the Netherlands Navy. They were stationed here from 1940 until 1946. Below this memorial is the Holyhead Maritime Museum which is situated on Newry beach. This is a small but wonderful museum. It has a number of artefacts and information relating to World War One: the stories of William Williams VC, DSM and bar of the Q ships, HMS Tara, RMS Leinster and HMHS Anglia. The Museum is well worth a visit it is opened seasonally 10am to 4pm every day, entrance fee £5.00.

On Monday 16th September, I went on a trip with the Broughton District History Group to the Imperial War Museum North at Manchester.

Some of the artefacts that caught my attention, notably the Uniform of Mairi Chisholm who with Elsie Knocker set up a first aid post at Pervyse Belgium in 1914. Mairi was awarded the Belgium Order of Leopold and the British Military Medal in 1917 for bravery. Also, there is a uniform of a Territorial Force Nursing Sister from WW1.

There is the gun used by JRR Tolkien at the Somme. He later he wrote “Lord of the Rings” and the “Hobbit”. [Editor’s note – Tolkien was at Thiepval in September 1916]. At the end of the visit, it was interesting to hear the comments of the group. It was a “Marmite” reaction [ie you either love it or hate it].

Since my last visit to the museum, the facilities have improved. The café is now on the ground floor. The food and the service were very good. The shop now has a much improved range of products.

A friend who is visiting his son in Brisbane, Australia has sent the following photos and explanatory description of the locomotive’s history. There is also a German WWI tank in the museum in Brisbane – the sole surviving A7V. 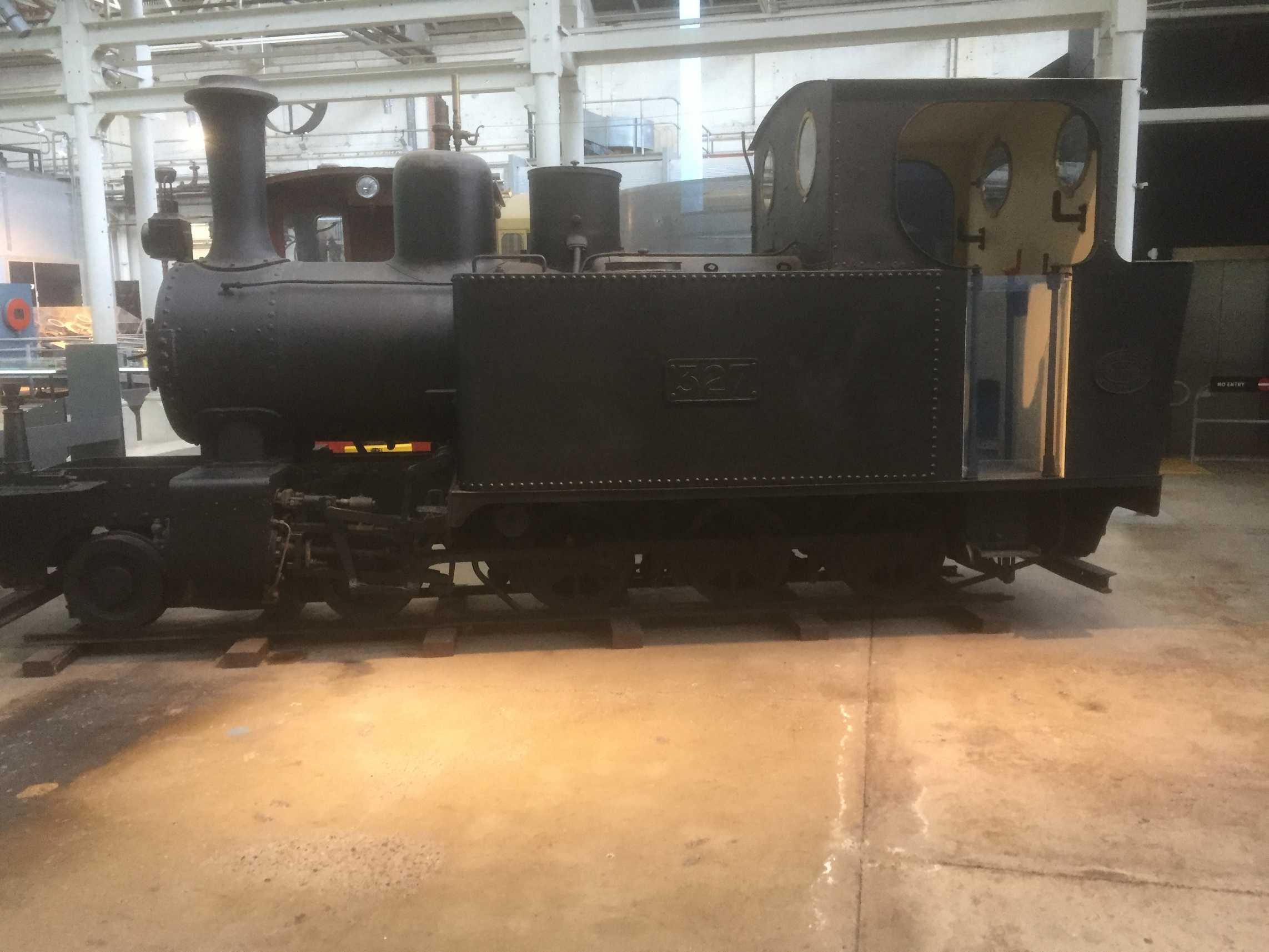 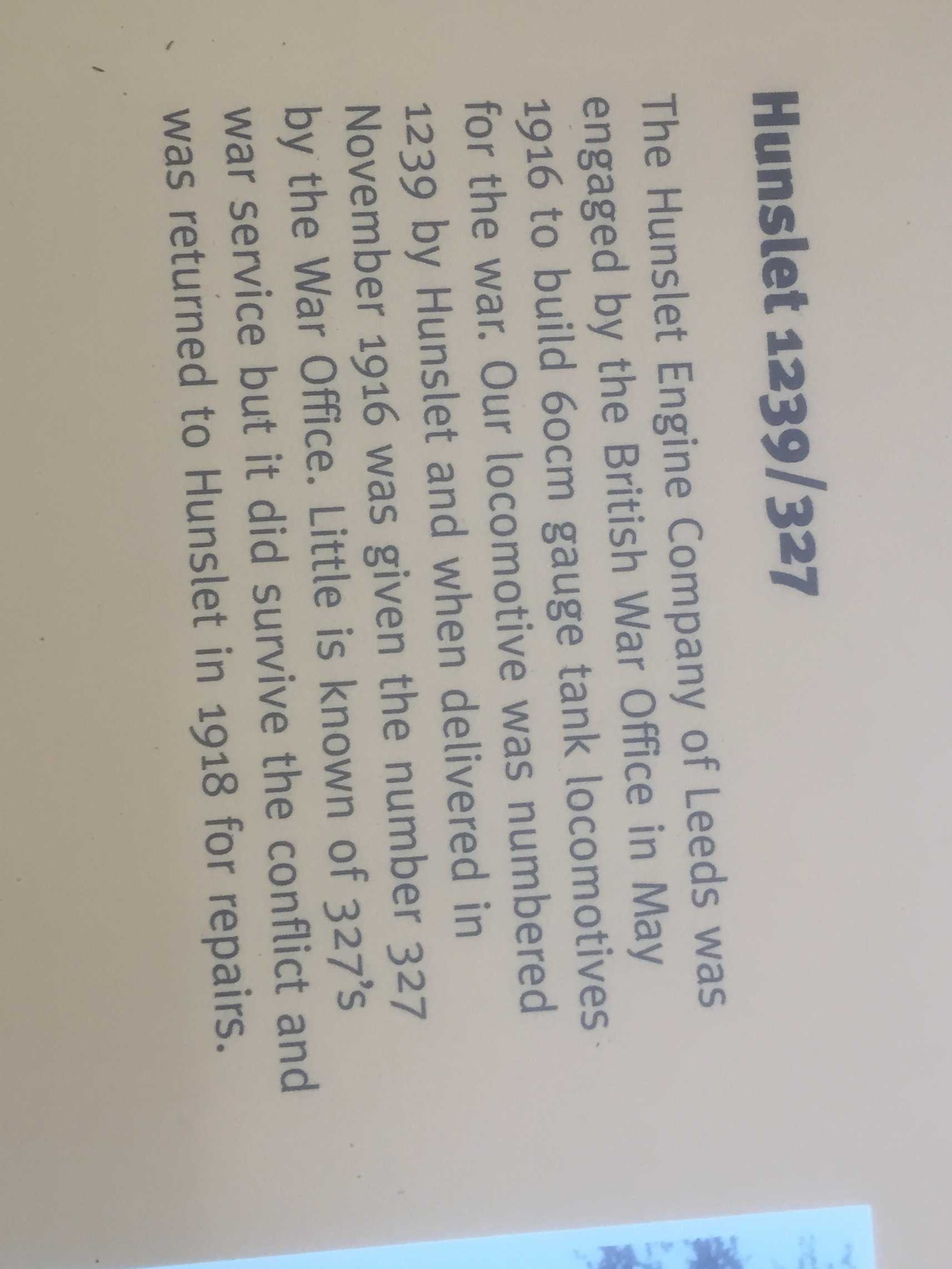 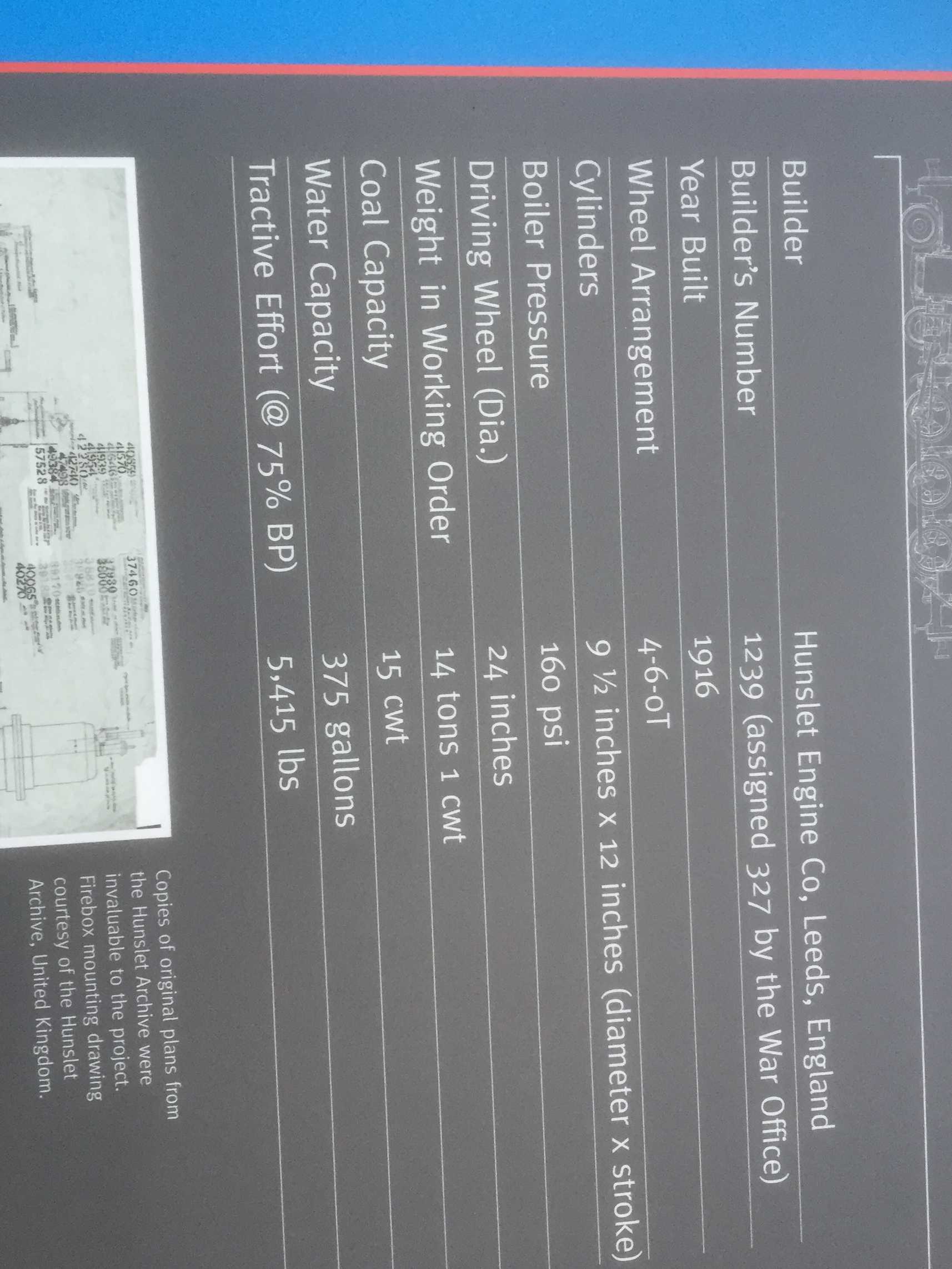