This is an article from "The Green Howard" of October 2017 about Lawrence Oakley, written by his great nephew, Jerry Rendell who came to talk to the NWWFA in 2016.  The local connection is that, after WWI, Lawrence Oakley set up as a an silhouette artist on the pier at Llandudno and was there almost until his death in 1960.  Many of the older generation of locals remember him.  He is buried in the church graveyard on the Great Orme, outside Llandudno.

In October 1917 the Austrian army, reinforced by several German divisions, pushed the Italian front back by eighty miles at the battle of Caporetto. The British and French governments were alarmed at the prospect of the front collapsing completely and decided to send five British and seven French divisions to help Italy.

The 23rd was one of the British Divisions selected to go. My great-uncle, Captain Lawrence Oakley, who was a silhouette artist, served in the 8th Battalion of the Green Howards. His silhouettes were published in a column called ‘Trench Life in Silhouette’ in The Bystander.

The train journey to Italy took five days and they were warmly greeted at stations in the south of France and then welcomed as heroes when they arrived in Italy. The 8th Battalion detrained at San Antonio and marched ten miles via Mantua to the village of Rivalta sul Mincio.

Oakley wrote to his mother on 15th November:

Through Mantua we had flowers thrown from the windows and people wore chrysanthemums and coloured ribbons. We were the first English in this village and of course the boys are having the time of their lives. The weather is mild and sunny, we are miles from the front and all is merry and bright. Have plenty of togs and food, grapes and apples galore. The girls are very pretty and the kids are all over me.

After a few days’ rest they marched 120 miles to the Montello, a hill overlooking the Piave river near Treviso. Oakley was the billeting officer for the 8th Battalion and described what that involved in a letter to his uncle:

I go ahead with four sergeants on bicycles, start about 6.00am and arrive at the village allocated to us at about 8.30. We chalk up the billets and interview the inhabitants.

I have to provide barns or empty rooms for 1,000 men [for the night shown there were billets for 770 Other Ranks], accommodation for 54 horses and wagons, beds where possible for 36 officers, a store for the baggage wagons to unload, an aid post and an orderly room. All the time the battalion is marching on our heels and very tired when they arrive, and if one has not been successful one gets a thin time.

One place we were all in an empty furnished palace with sheets etc., a magnificent house equipped with furniture and pictures. Other times like the present we mess in the kitchen with a wood fire and the family eat in the same room. A platoon of men sleep in the hay loft and the field kitchen is in the fold yard. We have killed a fatted goose today and live well on eggs and fresh butter. We are able to buy flour for the men and some fresh vegetables. This is a hundred times better than the ‘Boneyard’.

The best news of all was that the new front on the Piave river held, and the 23rd Division did not have to go straight into battle when they arrived. In the six months Oakley was in Italy there were skirmishes, raids and occasional shelling but no major battles.

But morale in the Italian army was very low, discipline was harsh, and many people in Italy, including in the army, sympathised with the new revolutionary government in Russia which had decided to pull out of the war.

As the 8th Battalion neared the front they encountered groups of Italian soldiers going the other way. The fresh British and French divisions provided much needed stability at a critical time for Italy.

The high spirit of the British troops was reflected in the review and pantomime the Division put on at Christmas. One of the songs went:

The bounder from far Biadene,

I’m a hell of a Fellow around the Montello,

I’m prince of the river Piave, the pride of my bally platoon,

And the girls of Padova all sigh and turn over for Monty of Montebelluna.

After a few weeks on the Montello the Division marched fifty miles west to the Asiago plateau (Altopiano). Oakley later wrote a poem in limerick style which was published in the 1918 edition of the 23rd Division’s magazine, The Dump.

The girls of the Altopiano

Are as sweet as the ones in Milano,

There was a fair maid from Lemerle,

Whose hair was both silky and curly,

She lived up a spout

Near the Oxford Redoubt,

Where the crumps made her hair a bit whirly.

Another young fairy from Coda,

Knew nothing of love, till Jack showed her,

Then she’d hug and she’d kiss

Through the long nights of bliss

In the Ghelpac Canoe - while he rowed her.

Still another wee puss at Cesuna,

Found a handsome young soldier to spoon her,

When he asked her to wed

She just simpered, and said,

Lest you think that the maids of the Plateau,

Are as thick as the plums in the gateau,

But my leave’s overdue,

So here’s to a train and the bateau.

Captain John Tilly was a company commander in the 8th Green Howards. On 8th June he led ‘D’ Company on a raid on an enemy outpost in the village of Morar. The raid was successful; four Germans were killed and eleven prisoners taken but Captain Tilly was seriously wounded and died later from his wounds. (See drawing of him further down the page).

A week after the raid the Austrians made their long-awaited attempt to cross the Piave river, one of the two prongs of their attack being against the 23rd Division’s front. They gained a temporary foothold elsewhere before being driven back, but the 23rd Division’s line was not breached.

The GOC of the 69th Brigade in which the 8th and 9th Green Howards served was Brigadier General T. S. Lambert. Oakley worked in Brigade Headquarters for some of his time in Italy and when Lambert was promoted to Major-General he appointed Oakley as his ADC.

Lambert was given command of the 32nd Division and the two of them left to take up their new posts in Flanders. The 8th Battalion and the 23rd Division remained in Italy and took part in the battle of Vittorio Veneto. The war in Italy ended on 3rd November 1918.

The GOC of the 23rd Division, Major-General Sir J. M. Babington, was also shortly promoted to Lieutenant-General. The Brigade and the Division were fortunate to have had two exceptional commanders.

Oakley produced a final page on Italy several months after he had returned to France and it reflects his memories of the good times there. The top scene set in Thiene on the edge of the Asiago Plateau shows the good relations between the three allies, and the ‘Two Yoke of Oxen’ perhaps represents Britain and France working particularly closely together. The rest of the picture is an idyll of life in rural Italy. 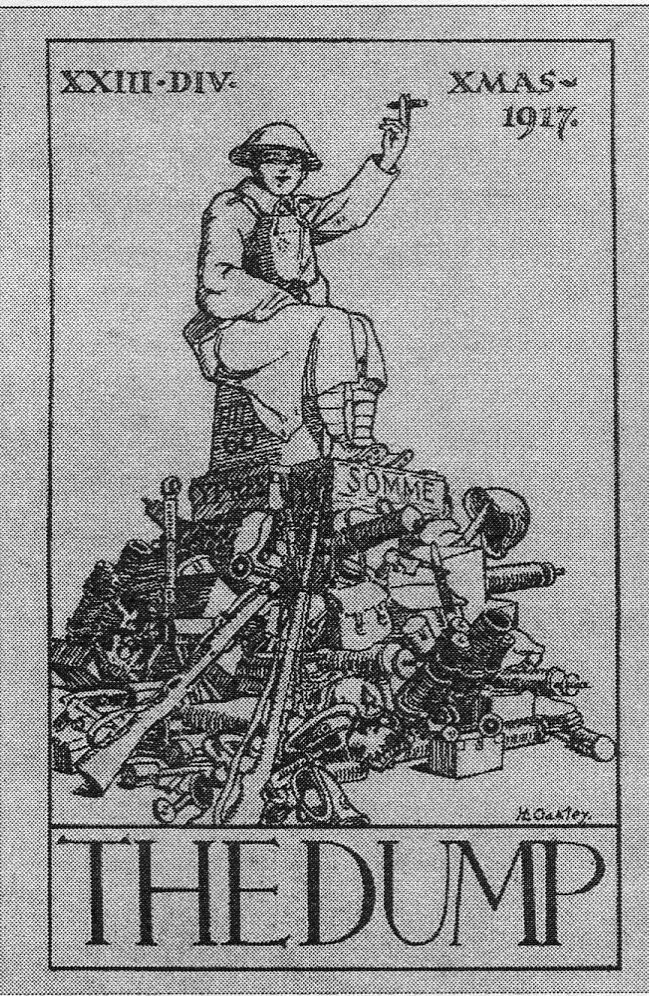 Above is the back cover of the Christmas 1917 issue of The Dump; the soldier is Private Dale of the 8th Battalion.
Jerry has written a book about his great uncle, which we would heartily recommend: 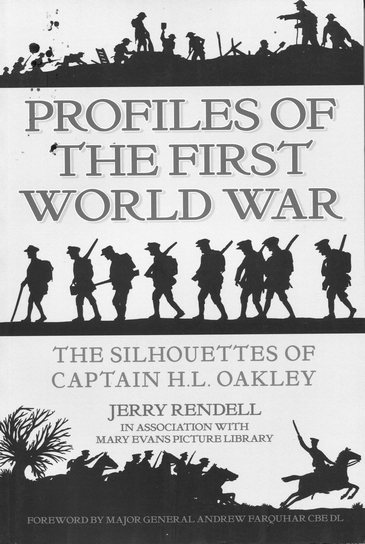 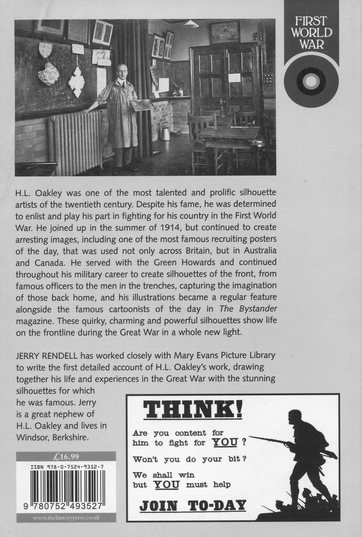 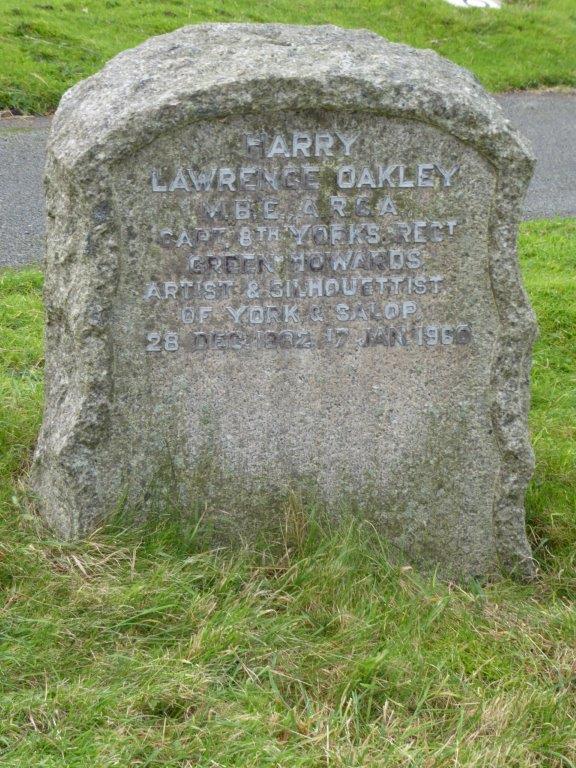 Above: Lawrence Oakley's grave on the Great Orme.