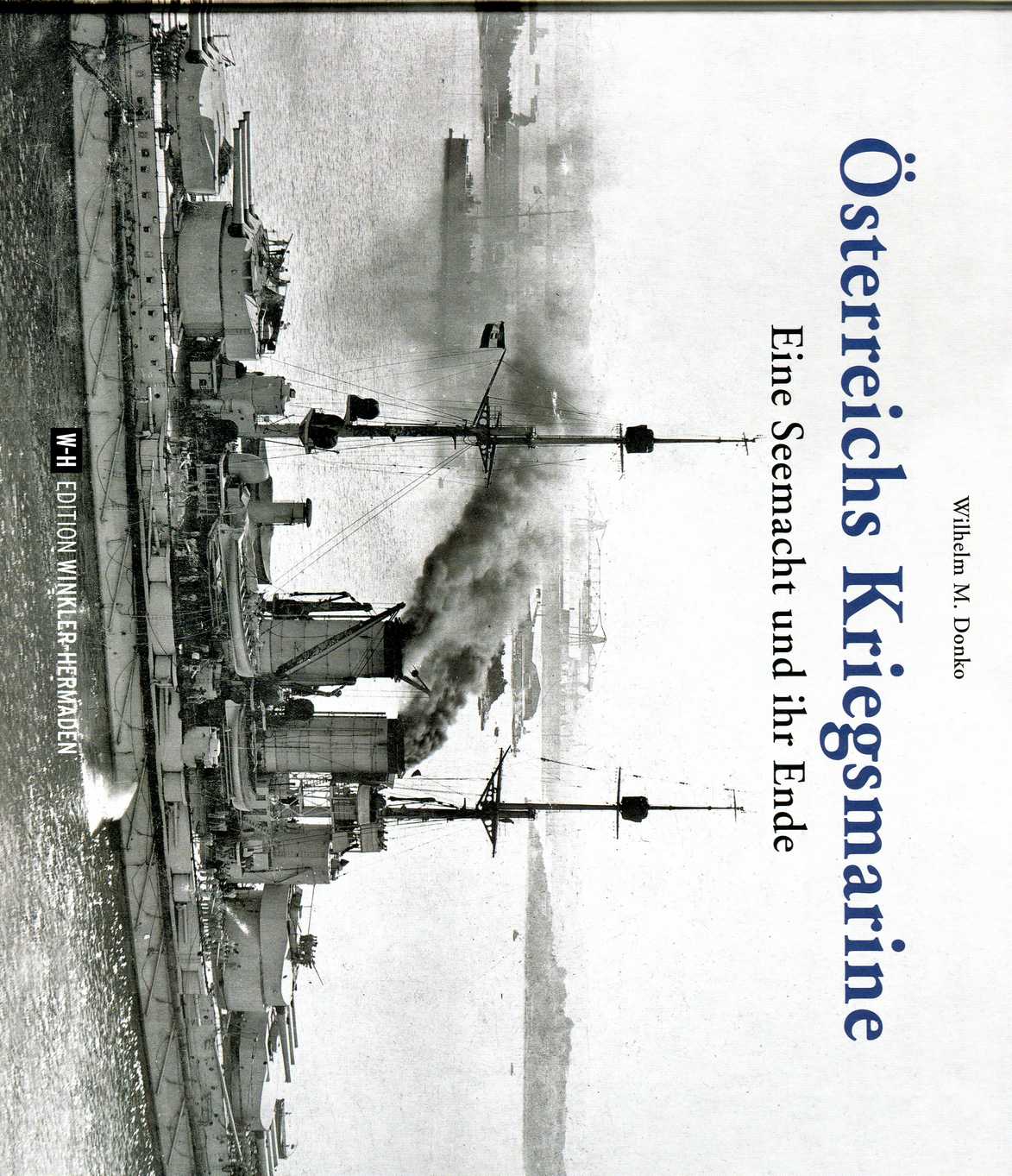 A sea power and its end

Well, did you even know that there was an Austrian navy? My first inkling of this aspect of WWI was when I visited the army museum in Vienna, a few years ago, and found a room of models and old photos of the navy. This book is a tribute to a navy that is forgotten in its own country, yet was a middle-ranking sea power in its day.

The author is in fact the Austrian ambassador to Norway. He has, however, a fascination with marine history and has written extensively on the topic.

The book starts in modern Pula in Croatia, on the shores of the Adriatic. The author describes the modern scene and explains the naval origins of buildings and features of the town, for this was the principal port for the Hapsburg navy. Pula (Pola) is a wonderful natural harbour and was the obvious choice for a naval base. Trieste, now in Italy, was a major port for the Hapsburg regime but was a commercial centre rather than a military one. Fiume had a role as well, as it was the location of the officer training school and a shipyard. Today, Fiume is Rijeka in Croatia. Kotor (Cattaro) at the south eastern end of the Adriatic coast was another base which was used as a base for German U-boots in WWI. Today it is in Montenegro. Nearby Gjenovic was also used as a U-boat base. Surface ships were based in Teodo (Tivat on the bay of Kotor in Montenegro).

The 18th and 19th century origins of the navy are discussed. One issue, always, with any Hapsburg entity is the nationalities involved. So, in the beginning Italians were very much involved. Given the seafaring traditions of, for example, the Venetians this is hardly surprising. With Italy becoming an independent country in the mid19th century and struggling against Austrian control, there was a move afoot in the Austrian navy to remove Italian influence. Italy, in effect, became a rival across the Adriatic from Austro-Hungary. So, the navy cadre became much less Italian and much more like the Austro-Hungarian army, ie with the German-speakers as the biggest nationality but with a considerable contribution from other nationalities, notably the Croatians. 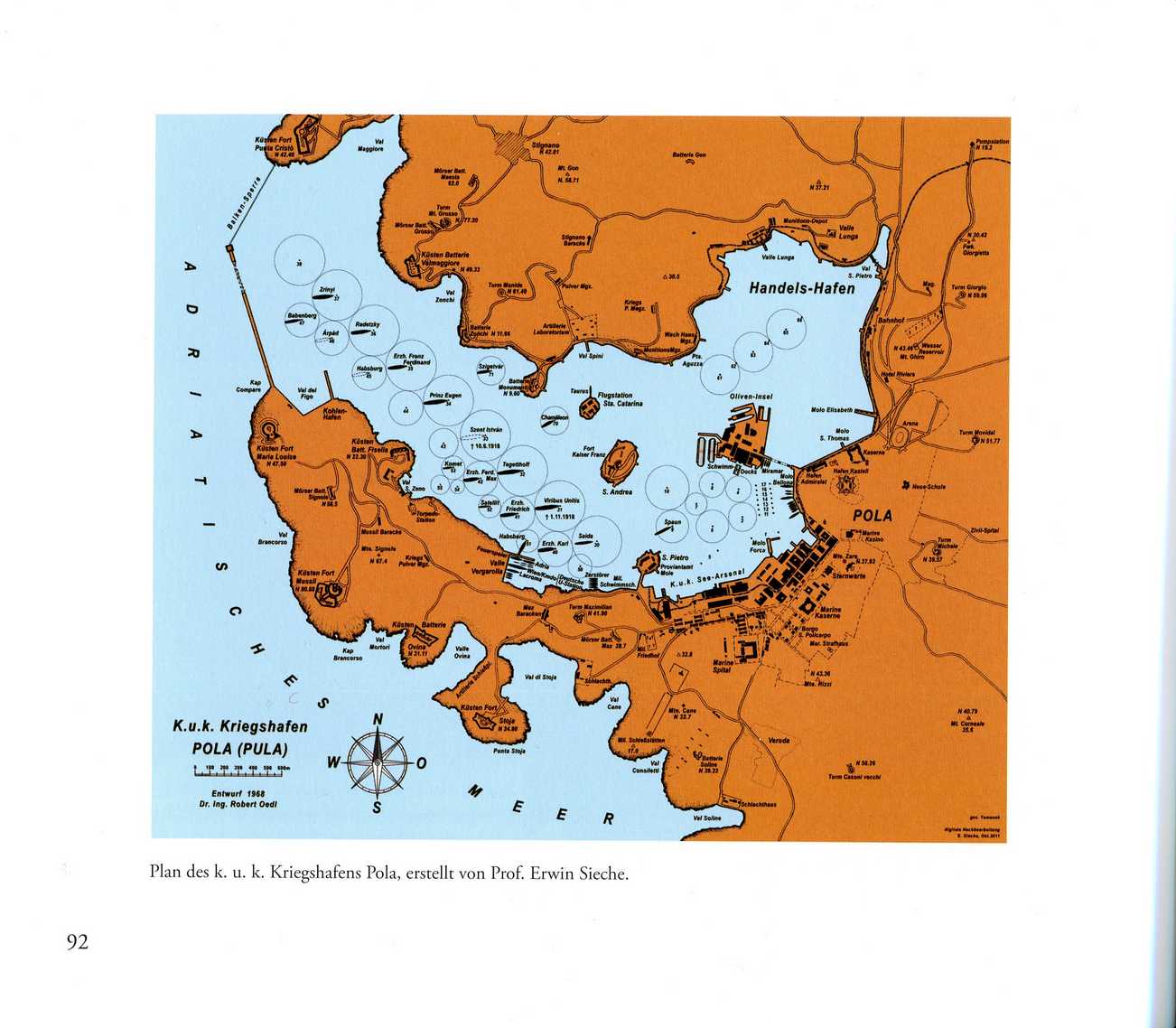 The natural harbour at Pola, with extensive anchorages for large ships, marked as circles, and coastal fortifications and a closeable entrance

In the period leading up to WWI, the Austrian navy was modernised and expanded. There were shipyards in Pula and Trieste, so they could build their own ships. The Hungarians insisted that one of the four new dreadnought class battleships had to be built by them, which indeed one was, in Fiume. So, at the outbreak of WWI the Austrian navy had four of the cutting-edge dreadnought class battleships. In the navy nomenclature, they were Tegetthoff class, named after a visionary head of the navy who died in 1884 at the age of 43 of pneumonia, in Vienna not on his ship. There were also non-dreadnought battleships, heavy and light cruisers, destroyers and torpedo boats. One of the ship designers was British. His niece in 1912 married a naval captain called von Trapp, whose offspring were later the subject of the Sound of Music. 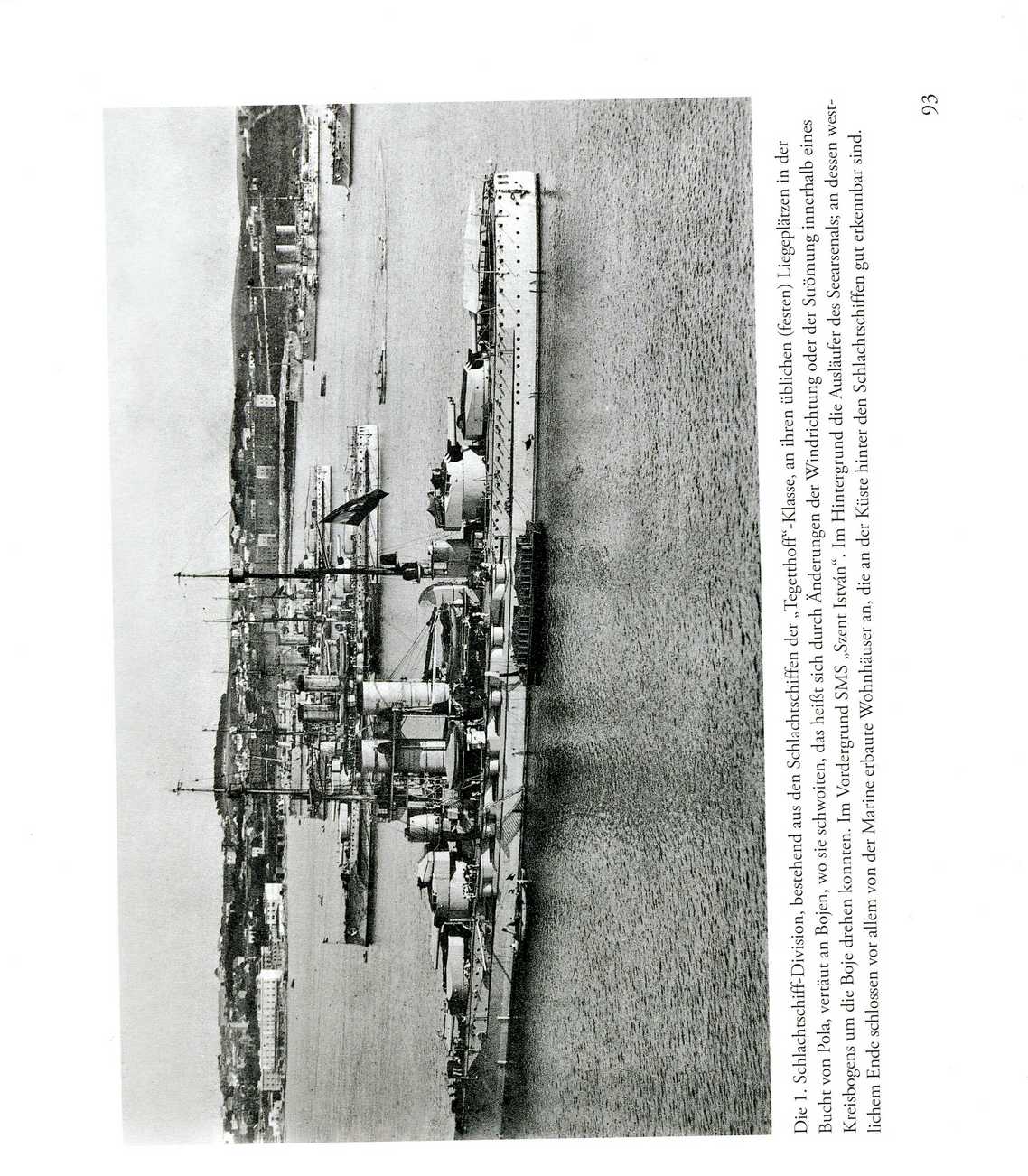 The dreadnoughts of the "Tegetthoff" class in Pola

The sphere of influence for the Austrian navy was the Mediterranean and the Adriatic, although the ships did go further afield. The cruiser Kaiserin Elisabeth was caught in TsingTao, a German colony, when Japan attacked on 27th August 1914. She fought on for some weeks, until her ammunition ran out, and she was scuttled by her crew. The Mediterranean was an important route for shipping going to and from the Middle and Far East, notably India. In WWI, Australian and Indian troops were brought into France through the Mediterranean, and the British went east to Mesopotamia, Palestine, Gallipoli and Salonika. A hostile navy running rampant could have caused a lot of damage.

By October 1918, it was really all over for the Austrian navy. The big ships were divided up between Italy, France and Britain. The USA, Romania, Portugal and Greece were allocated the lesser ships. The country which we would know as Yugoslavia did not inherit the Austrian navy, not least as the Italians did not want another naval power in the Adriatic. Indeed, Italian navy divers sank the flag ship Viribus Unitis on 1st November 1918 in Pola harbour to prevent it falling into the hands of Yugoslavia. Four hundred sailors died.

So disappeared from history the Austrian navy. As the author points out, there was a key factor which the Austro-Hungarian and German governments failed to understand in following the doctrine of the American Alfred Thayer Mahan in his book The Influence of Sea Power upon History. That was, the importance of having strategic overseas naval bases, as well as powerful ships. If the Austrian or Germany navies had broken out through the Entente blockades, where could they have gone? This was the Achilles heel of both navies.

The book has some wonderful photographs. Indeed, the picture postcard was apparently an Austrian invention, so there are a selection of picture postcards illustrating the ships and bases of the Austrian navy. It is an interesting book with lots of photos on a neglected aspect of WWI. The book is in German.